Marguerite’s Words of Wisdom for January

In January 2014, my friend from Marietta lost a wonderful man, her husband Rick, while he was waiting patiently for a heart transplant at Emory University. This man was passionate about four things: his beautiful and loving wife Janet, his sons Ricky and Ryan, making McDonalds a successful corporation in the Atlanta area, and last but not least FOOTBALL, (especially his beloved Baltimore Ravens)!

I was honored to sing at his memorial in February 2014. I had known Janet for some time; but I got to meet his sons and his Mom and Dad, in addition to other friends and relatives, plus a huge fan club from the McDonald’s Corporation who loved this man in a very deep way. So it gave me great joy in August, when Janet let me know she went online to buy a copy of Message from Daddy, to see what she could do to learn about healing her heart, and to help her sons do the same. She even sent a copy Rick’s Mother, who at 85 years of age had no idea why she was alive and her son was not. 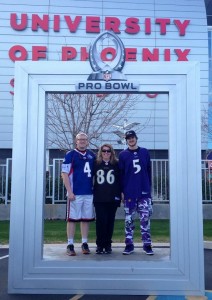 In Chapter 34: Celebrate the First Year, I remind people to honor themselves for surviving that first year of grief work. I want them to realize they have passed through all of the holidays, anniversaries, and special events that they would have shared with their loved one. They have allowed themselves to feel the loss, experience the pain, honor their feelings, get love and support from family and friends, and learn new strategies for coping with life, when that special person is no longer “in the flesh”. They have actually survived all of the challenges of the first year!

I tell my readers to plan a celebration! It is a celebration of that person who contributed so much to their life while walking this earth, but it is also a celebration of their own personal victory for making it to this milestone! Janet, Ricky, and Ryan found a way to do just that, and it was an awesome experience for all of them!

One day, Janet just went online and bought airline tickets to Arizona, and hotel rooms in Phoenix, so that the family could “take Dad to the Pro Bowl!” Look at their photo and see the joy on their faces.  The boys told me that they felt Dad with them every moment of the day. Janet could feel Rick’s excitement, every time she was rooting for one of her favorite Ravens or screaming about outstanding plays!

When they got home and told me the story, I knew it would have to be my post for January. I hope it inspires all of you to create a special celebration when you reach that anniversary, in the process of your grief work. If the first anniversary has already passed, then have the celebration on whatever anniversary is next. God bless!