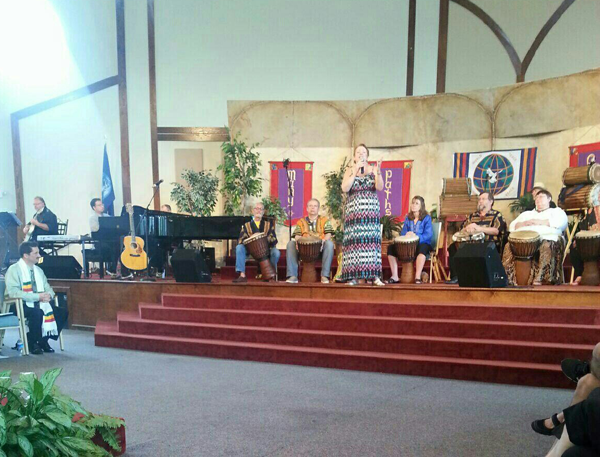 Marguerite Vardman has been singing since she was old enough to speak. She was blessed to have a mother who was a Big Band singer in her younger years, then participated in church music and musical theater for the rest of her life. She loves to tell this story: “Mom taught me how to sing when I was barely 2 years old. One of my favorite songs was ‘You Are My Sunshine’, because my Nanna would sing it with me, whenever I visited her house. By the time I was 6, I had memorized all the Broadway Show Tunes on Dad’s record albums. So I was required to perform them for our friends and family, whenever they came to dinner!

“Then Mom brought me to Saint Bridget’s Adult Choir when I was only 13 years old. We sat next to each other and sang the beautiful Latin Masses. I could always feel God’s Love flowing through me; as I performed Mozart, Schubert, Handel, Bach, and Vivaldi! Mom gave me so much confidence, that I was singing solos by the time I was 16. That same year, I performed the role of Daisy Mae in the musical ‘Li’l Abner’ at our high school. Even though I was one of the shyest girls in our school, once I was handed a song or a script, I became a whole new person! My music and drama directors were somewhat shocked that I auditioned by walking across the stage, without any musical score, as I sang Daisy Mae’s solo with a southern drawl! When I went to college, I decided to major in Nursing and minor in Music. That’s when I got to perform three seasons with Boston Opera Company. When my Dad got to see me onstage with Beverly Sills in Donizetti’s ‘Daughter of the Regiment’, he knew he could die a happy man!”

After graduating from Northeastern University in 1976, Marguerite continued to perform with their Choral Society and Madrigal group for several more years. The soon-to-be Director of the Boston Lyric Opera Company, Janice Mancini Del Sesto, was her voice teacher until she relocated the South in 1983. In Atlanta, she studied with Sue Williams at Kennesaw State University.

Over the years, Miss Vardman has also performed with Boston Symphony Orchestra, Concerts in Black and White Orchestra, Robert Shaw and the Atlanta Symphony Orchestra, and Susanville Symphony Orchestra. She, and her daughter Julie Anoush (who is named after Julie Andrews), sang gospel choir background vocals for Michael Bolton at Lakewood Amphitheater in 1994; and later performed with the Metro Atlanta Gospel Choir for the 1996 Special Olympics. In 1999, she collaborated with Kurt Beals of Atlanta to produce an original CD of contemporary church music, entitled “Starting*Today”. To date, Miss Vardman has been a soloist at over 50 churches across North America. She is available to perform at birthday and anniversary celebrations, weddings, memorial services, professional sporting events, etc.

To schedule Marguerite as a soloist, please visit the Contact page on this website. Please include a contact name; the name of your church, spiritual center, or organization; the date/time of the event, and a contact number.